“Waterlands have done an excellent job renovating my current pond.” “They provided both technical advice, practical solutions with attention to detail to produce a fantastic result.” “I would recommend Bryan for any pond build or restoration project large or small.” – Jonathan Turner, Midsummer House. “Had my first chance to see the pond in daylight this morning. It looks great, and will be stunning, I'm sure, once planted.” – David Smith.

Waterlands Productions
work in Sussex, Kent, Surrey, Hampshire, Essex & nationwide and have created and worked on lakes, ponds, rills, waterfalls, streams, fountains, ha-has and landscapes from our base in East Sussex.

Fountains indicate and signal well-being to all. Not only that, they share their Fountain Karmic energy with all who see, hear, smell, taste and touch them. They are, and always have been, necessary for permanent settlements. We use them when ever we turn on a tap. Fountains have come to symbolize the generosity of a god, an institution 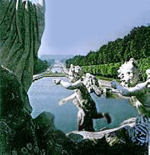 or a person. They indicate abundance and ingenuity. In every culture they play a part in the mythology of life. In Scandinavian mythology, for example, the fountain of Mimir, source of hidden wisdom, lay under the roots of the great world tree and in Islamic culture fountains are found refered to in the Koran, in the garden called Paradise. In the Bible the passage: “It is done, I am Alpha and Omega, the beginning and the end. I will give unto him that is athirst of the fountain of the water of life freely,” reflects the importance that fountains symbolised to the writers. Fountains are infinitely adaptable. They represent ingenuity and life, power The Alhambra, Granada, Spainand control. They can make you want to laugh and yet we worship at them. We make our offerings to them and entrust to them our wishes and secret joys. 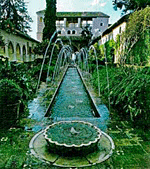 The fact that it has always been so is illustrated by Morton who records that the Jesuit owners of the warm springs at Bagni di Vicarello decided in 1852 to send a gang of workmen from Rome to clean the spring which had become choked up. In draining it they came upon a layer of bronze and silver coins of the fourth century BC, and then layer upon layer until they came upon offerings which were made before the time of minted coins. These were rough scrapes of copper. At the bottom they found stone arrow heads and polished stone implements. 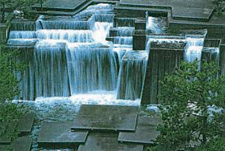 Fountains are places of heightened awareness. They add quality of life throughout the world and are becoming available to more people all the time. They have no enemies. Why water fountains should have this Fountaineffect nobody knows. Perhaps in part we hearken back to when our ancestors left the seas, or perhaps we are reassured bythe presence of an element we cannot survive without. Maybe the ionizing effect of the water fosters a feeling of well being, or perhaps the sound touches some early memories of life within the womb. Sir Geoffrey Jellicoe, the eminent landscape architect, believes that “the underlying attraction of the movement of water and sand is biological. If we look more deeply we can see it as the basis of an abstract idea linking ourselves with the limitless mechanics of the universe.” Whatever the reasons the fact remains that we will always enjoy and be refreshed by moving water.
© Bryan Hirst

A passion for water and landscapes 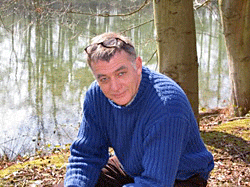 In twenty years no two jobs have been alike. This has been possible because of the delightful clients and garden designers who have consulted and commissioned us. We have undertaken a wide range of projects as you can see in this website as well as acting as consultant for many other projects. I have also travelled widely to observe and photograph water features, especially my own special interest in the water gardens of the Mogul Emperors in Pakistan, India and Kashmir

An abiding love of plants, water and the English landscape 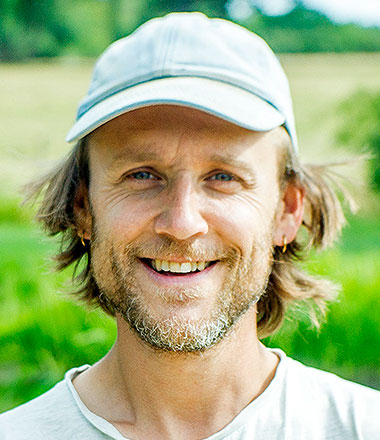 WILLIAM NEAME
Will is our project manager, having worked for four years under Bryan’s tutelage. With a degree in Anthropology from the University of East Anglia, Will has had a varied career from camera operator at the House of Commons to head brewer of Kent’s Old Dairy Brewery. In more recent years, his passion for nature and the outdoors has taken him into deeper waters. Growing up in the Kent countryside, Will has developed a love of plants, water and the English landscape. Be it a small patio fountain or a large lined lake, Will is a stickler for perfection and is responsible for ensuring your project travels safely from an idea to a lasting reality.

NICHOLAS HIRST
Nicholas is the most recent addition to the Waterlands team, having joined as an apprentice in 2019. He escaped to Brighton from south London fifteen years ago and trained in traditional oil painting methods. His love of light, colour and nature has brought him from painting the landscape to the more viscerally satisfying challenge of shaping it.

Nicholas is dedicated to helping realise clients’ visions with precision and clarity.

For me, the alchemy occurs in the margins, where the land, quenched by water, is transformed by light into life. I never cease to be amazed how quickly nature enters the ponds we create. We put the system in place and life takes over. It’s such a joy seeing ducklings, amphibians and swallows skimming the water, often within days.